In the Eyes of Others: How People in Crises Perceive Humanitarian Aid 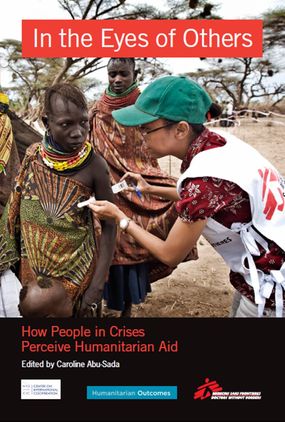 Over the past 40 years, Doctors Without Borders/Médecins Sans Frontières (MSF) has developed a reputation as an emergency medical humanitarian organization willing to go almost anywhere to deliver care to people in need.

Yet when questioned about MSF, people in countries where it works had different perceptions. One thought MSF was from Saudi Arabia and financed by Muslim charities. Another thought it was a China-based corporation. And yet another believed MSF requires everyone who enters their medical facilities to be armed (quite the opposite, in fact).

These are just some of the surprising revelations found in In the Eyes of Others: How People in Crises Perceive Humanitarian Aid. Co-published with Humanitarian Outcomes and NYU’s Center on International Cooperation, the book is a result of MSF’s attempt to better understand how its work and principles of neutrality, impartiality, and independence are perceived by those who receive its emergency medical care.

A variety of scholars,researchers, students, and other humanitarians also contribute essays expanding on issues of perception and exploring the many facets of humanitarian action today.