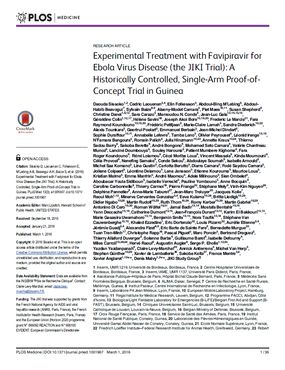 Ebola virus disease (EVD) is a highly lethal condition for which no specific treatment has proven efficacy. In September 2014, while the Ebola outbreak was at its peak, the World Health Organization released a short list of drugs suitable for EVD research. Favipiravir, an antiviral developed for the treatment of severe influenza, was one of these. In late 2014, the conditions for starting a randomized Ebola trial were not fulfilled for two reasons. One was the perception that, given the high number of patients presenting simultaneously and the very high mortality rate of the disease, it was ethically unacceptable to allocate patients from within the same family or village to receive or not receive an experimental drug, using a randomization process impossible to understand by very sick patients. The other was that, in the context of rumors and distrust of Ebola treatment centers, using a randomized design at the outset might lead even more patients to refuse to seek care.Therefore, we chose to conduct a multicenter non-randomized trial, in which all patients would receive favipiravir along with standardized care. The objectives of the trial were to test the feasibility and acceptability of an emergency trial in the context of a large Ebola outbreak, and to collect data on the safety and effectiveness of favipiravir in reducing mortality and viral load in patients with EVD. The trial was not aimed at directly informing future guidelines on Ebola treatment but at quickly gathering standardized preliminary data to optimize the design of future studies.